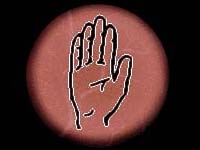 Touch is an interactive program running from a touch-screen console, intended to explore issues of sadistic, voyeuristic fantasy and power in the electronic landscape. The user is enabled to act within three modes of power on a central figure. At the close of each interaction, the user discovers that the locus of power shifts from themselves to a remote, authoritarian source via modem connection, where data from their interaction is collected. This shift underlines contemporary culture's dualistic use of information technologies, which users experience as they initially participate as effectors and later as affected.